Reinventing the dole: a history of the Unemployment Assistance Board 1934-1940 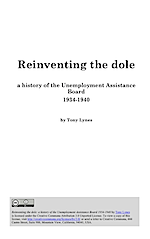 Unemployment benefits are the most problematic aspect of social security policy and administration. What level of income should be provided for those who cannot find paid work? To what extent should benefits reflect changes in the cost of living or in the incomes of those in work? How can adequacy be reconciled with the preservation of work incentives? What should be done to prevent payment of benefit to those who could and should be working or for whom other means of support are available? Should entitlement depend on contribution conditions? Should there be a means test and, if so, to what extent should individual circumstances and needs be taken into account, what types of income or capital should be wholly or partially disregarded, and to what extent, if at all, should the resources of persons other than the unemployed person and his or her dependants be included? Should there be a legally enforceable entitlement to benefit or should eligibility depend, at least in part, on the exercise of administrative discretion? What administrative and decision-making structure is best suited to provide benefits of the type or types required? How should the system be financed?

These and many other questions had to be decided in the short period, 1931-1940, to which this study is devoted, and mainly in the first half of that period. The dual system of unemployment insurance, administered by the Ministry of Labour, and public assistance (the renamed Poor Law) provided by local authorities had proved inadequate to the needs created by catastrophic levels of unemployment. The interim solution adopted in 1931 was to limit entitlement to insurance benefits, substituting for them means-tested payments assessed, but not financed, by the public assistance authorities. The Unemployment Act of 1934 introduced a more durable solution: from January 1935, the means test was to be administered by a central government department created for the purpose, the Unemployment Assistance Board.

The board was a constitutional innovation: a department of government with its own budget, headed not by a minister but by the six members of the board, appointed by the Minister of Labour but for whose actions he could not be held responsible. Yet he was obliged to act as the board’s spokesman in the House of Commons – a role in some ways comparable to that of ministers in relation to the executive agencies established in the 1990s to administer a wide range of government services, but with two crucial differences. First, today’s executive agencies (e.g. Jobcentre Plus) derive their authority directly from the minister of whose department they are a part and, in the last resort, the minister cannot disclaim responsibility for their actions. Secondly, the responsibilities of the Unemployment Assistance Board were not merely administrative but extended to questions of policy. The regulations under which payments to the unemployed were to be determined were drafted by the board itself. The minister could propose amendments but parliament could not: it could only accept or reject the regulations as a whole. Moreover, once the regulations had been approved, the way in which they were applied to individual cases depended largely on the instructions issued by the board to its officers, operating from area offices around the country, and those instructions were not subject to any form of parliamentary control.

Equally innovatory was the fact that, for the first time, means-testing of the unemployed was to be a function of central rather than local government, the same rules of assessment being applied across the whole of Great Britain (separate but similar arrangements were made for Northern Ireland). Devising those rules was a challenging task. The existing policies of the public assistance authorities could not be adopted, for at least three reasons. First, there were wide differences of both policy and practice between authorities. Secondly, in the government’s view, many of the authorities had abused the trust placed in them in 1931, in some cases virtually refusing to apply a means test as a condition of eligibility for payments. Thirdly, the political acceptability of the board depended on unemployment assistance being visibly different from the Poor Law. Every aspect of the means test, therefore, came under scrutiny in the months preceding January 1935, and again in 1935-36 when the furore resulting from the introduction of the regulations had led to their virtual withdrawal and the imposition of a ‘standstill’.

My interest in these events goes back to the time, before 1966, when the UAB’s post-war successor, the NAB (National Assistance Board), was still responsible for means-tested assistance, though its responsibilities were no longer confined to the relief of the unemployed. There were close similarities between the National Assistance regulations of 1948 and the pre-war Unemployment Assistance regulations, and many of the NAB’s officials had worked for the UAB. The relevance of research into the origins and early development of the UAB to current social policy issues was self-evident. More than forty years later, although the role of means-testing in the British social security system seems more firmly established than ever, much less remains of the original structure. In this volume, therefore, no attempt is made to relate the experience of the UAB directly to the problems and solutions of the early years of the twenty-first century. That there are parallels to be drawn and lessons to be learnt will be sufficiently apparent to readers with a particular interest in the financial situation of the unemployed, the establishment of minimum incomes and the role and techniques of means-testing. Others will, I hope, find the story of the UAB worth reading for its own sake, not least for the light it throws on the machinery of government in the inter-war period and on the behaviour and attitudes of some of the participants.

The story is presented here mainly from the points of view of the administrators and politicians, as recorded in the official papers deposited in the National Archives. No doubt a very different account could have been written based on the memories of the unemployed men and women who depended on the board and its officers for their weekly income, but the time for writing it was half a century ago when memories of the 1930s were still fresh. Nor is it possible to give a systematic account of the way in which individual cases were dealt with, since most of the UAB files in the National Archives are concerned with the discussion of policy issues at headquarters level; only a handful of case papers from the board’s area offices has been preserved. A good deal of information about individual cases is contained in the policy files but the fact that a case was reported to headquarters implies that it was in some way untypical.

Reinventing the dole: a history of the Unemployment Assistance Board 1934-1940 by Tony Lynes is licensed under a Creative Commons Attribution 3.0 Unported License.

1 Response to Reinventing the dole: a history of the Unemployment Assistance Board 1934-1940